November is National Adoption Month and there have been lots of wonderful stories in the media lately. Some of them have been really extraordinary.

I believe that honest and open discussions as well as truth-telling will eventually extinguish the myths still surrounding adoption – open adoption, in particular. Over the last several months, I’ve become immersed in the open adoption community. I’ve followed blogs, chatted on twitter and read extraordinary articles, which little by little are shedding light on the secrecy, shame and stereotypes that unfortunately still permeate the adoption community. And I’ve heard horror stories just as you might have of parents who have “returned” their adopted child as if the child was some commodity purchased at the local Costco. It’s heartbreaking. And I’ve seen the ridiculous so-called reality shows that glamorize teen pregnancy and trivialize the very profound and personal choice of adoption. I’m not linking to any of these shows because I don’t want to generate any more publicity for them than necessary. But one flip to the Oxygen Network, Bravo or MTV will clue you in to what I’m talking about.

But there is one woman whose voice rises above all the negativity. Lori Holden is an adoptive mom who has embraced her children’s birthmothers. Heck, she even co-authored a book, “The Open-Hearted Way to Open Adoption,” with her daughter’s birthmom. It’s a fabulous read. I encourage everyone to buy it, and read it. 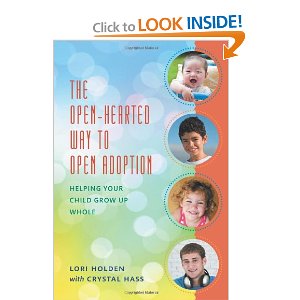 Today, Lori wrote a national article for National Adoption Month. She titled it, “Ready or Not, Glasnost is Coming.” Her premise is that she believes the walls surrounding adoption will come crashing down – not unlike the Berlin Wall 25 years ago. She believes in openness in open adoption (not walls of secrecy or shame.) She believes in honoring her children’s biological heritage (not building walls that hide the truth.) And she believes that all adoptees have the right to open access to records so they can know their personal histories, not to embarrass or reveal – but so that adoptees can reclaim their personal identity.

Her article is fabulous. And so, I decided to repost it here. I hope you’ll take the time to read it.

5 thoughts on “Glasnost is Coming…”

Welcome! I'm Kim.
I'm a blogger and writer from Boston but living in New Jersey. Wife to one. Mom to two girls. And a birthmother involved in an open adoption. Former WDW cast member so I'm a bit of a Disney freak, too. I write about parenting, current events, open adoption, travel, politics and whatever else pops into my head. I'm glad you're here.

“The Untold Stories of Motherhood” – My Story